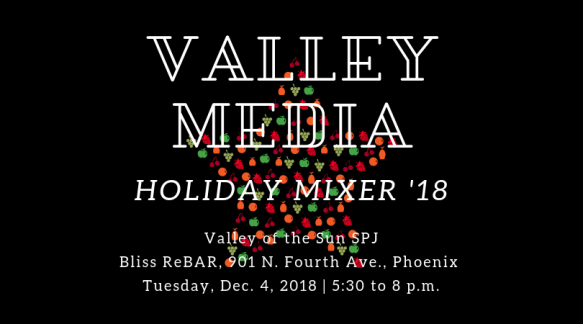 Roosevelt), named by USA Today as one of the 10 Best Nightlife Destinations in Downtown Phoenix.

Get your Yule on, celebrate the year gone by and the year ahead with your media peeps, colleagues and competitors alike, in this must-be-there holiday event! Your friendly neighborhood Valley of the Sun SPJ chapter will put out a spread of free appetizers (drinks are on you) and give away door prizes. 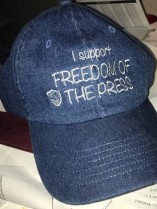 We will also be raising funds for chapter events and activities by selling cool soft denim blue caps with the SPJ shield logo and the words, “I Support Freedom of the Press” for only $10!

Admission to the mixer is free, so — right now! — say your “Going” today on our Facebook event page, Valley Media Holiday Mixer ’18. The event hashtag: #getyouryuleon 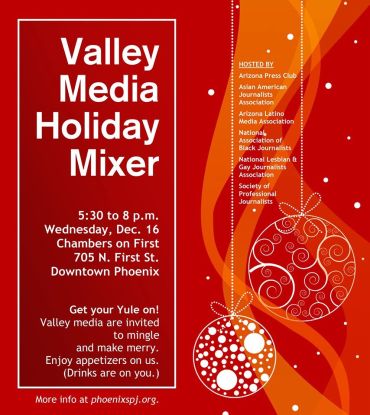 Chambers on First is owned by the same owners as its predecessor, The Turf, where this event has been held in 2013 and 2014. The interior has been renovated, including chandeliers with a law library/private club look. Check out photos and the menu here. Happy hour prices on drinks are offered until 7 p.m.

It seemed like a terrific idea in 2013: Get members of Valley media organizations together for a big holiday happy hour, with free appetizers to attract skeptical journalists, to celebrate putting another year behind us with hopes for better times in the next one.

Not only did it seem like a good idea, it was. About 35 of us showed up at various times 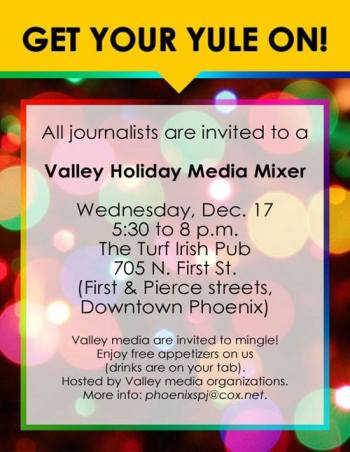 during a chilly-by-Phoenix-standards December evening at The Turf, an Irish pub with good vibes of comfort and joy. As we began making our way out, we talked about doing it again — although admittedly we didn’t think it wocould be another year before we did.

Well, it is another year, but once more the 2nd annual Valley Holiday Media Mixer is here to help local media people to get their Yule on. Valley of the Sun SPJ is one of the sponsoring organizations as is the Arizona Press Club, the Rocky Mountain/Southwest chapter of NATAS and the Arizona chapters of AAJA, NAJA and NLGJA.

So plan to be there, rest ye merry, gentlemen (and ladies), and bring your friends in the business. This is a membership building opportunity for each of the media groups, after all. It’s 5:30 to 8 p.m. Wednesday, Dec. 17, back at The Turf, 705 N. First St., between Fillmore and Roosevelt, just north of the Cronkite School in downtown Phoenix. No need to RSVP, just be there to toast the holidays (drinks are on you, but, as said above, the appetizers are paid for by the media groups), renew connections and friendships, and make it your starting point for a brighter, better 2015.